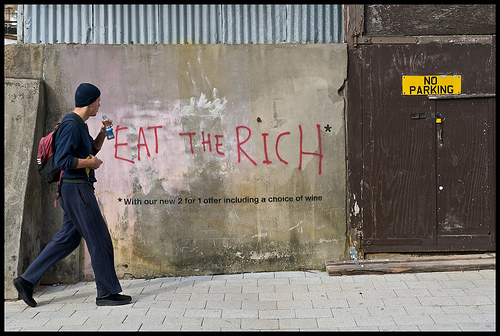 Steve Jobs dies the 5th of October 2011. The news appears on the first pages of all newspapers; TV channels, magazines, the Internet—every media talks about it, commemorates him, sings the praises of the man that changed the world’s future. And obviously the funeral vigils outside the Apple Stores. Few people received a similar treatment, maybe nobody. The first similar event coming to mind is the death of Pope Giovanni Paolo II. It is curious that the comparison is between Jobs and the major authority of one of the world’s most powerful and diffused religions.

So curious that it leads to consider that, maybe, the founder of Apple—actually co-founder together with Steve Wozniak—has undergone as well a mystification process which even skims sanctification or deification, a process that projected on the man Steven Jobs the merits, the prestiges and the intelligences of hundreds, maybe thousands of people more or less involved in the company’s action range. Looking at it closely, indeed, the statement “Steve Jobs invented—or even created—the iPhone” is certainly a stupid and false assertion. Nonetheless today it corresponds to the truth for most people. Maybe what Steve Jobs is personally responsible for is exactly this transformation of himself into the icon Steven Jobs, an icon loaded with the value of free market and unrestrained capitalism—“Stay hungry, stay foolish” sounds as the motto Everybody against everybody on which is founded the healthy liberal competition that leaves no space to the weakest people. The same values with which Apple’s products have been overcharged—ulterior advanced stage of that commodity fetishization process that rendered this an “extremely complicated thing, full of metaphysical nuances and theological fancies” (Marx, Das Kapital).

This mystifying narration imposed from above, bearing with itself an unpleasant identity, has been immediately contrasted with a much different one, that of Steve Workers:

Steve Workers raises from the Internet, as an alter ego of the ex Apple’s CEO, a mythopoetic act shared by many, an icon lacking its identity—but owned by thousands of different identities, those of the workers. Steve Workers steals the famous Jobs’ phrase—which actually is not to be ascribed to him, being a quotation: http://it.wikipedia.org/wiki/The_Whole_Earth_Catalog#cite_note-jobs-0—and overturns its meaning: Stay hungry, eat the rich. Stay foolish, fight capitalism. Steve Workers, the day after the passing of the icon-man that introduced communication technology into the pockets of million of users, is the icon-multitude reminding us how technology is first of all matter—it is hardware before being software. If Steve Jobs succeeded in evaporating a telephone into an idea—or ideal—Steve Workers wants to remind us that the idea in our pockets is always and in all cases ensuing from an—environmental, physical, intellectual—exploitation process.

The issue is complex, thorny and delicate. Here are some links to examine it more deeply: