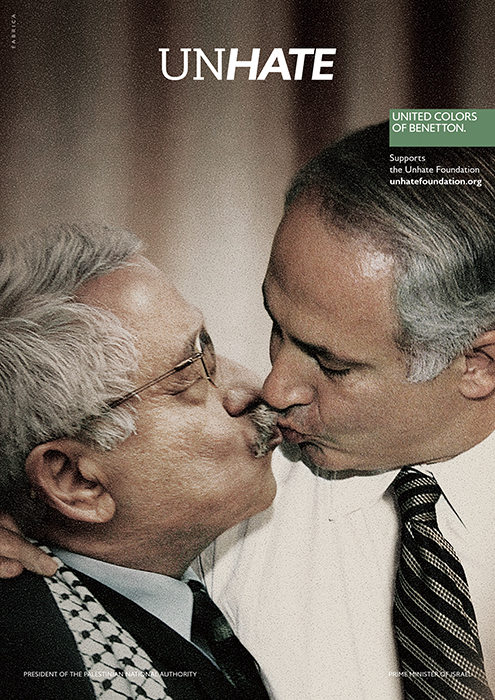 The kiss between Israeli Prime Minister Netanyahu and Palestinian President Abbas in Benetton’s Unhate campaign, 2011. The postpolitical condition of Western democracies is now promoted primarily on the communications level.

Twenty years after the fall of the Berlin Wall the explosion of the 2008 financial crisis showed how a world modelled on financial capitalism is not “the best of all possible worlds.” But this shattering of the (neo-)liberal utopia has now translated into a positive outcome: we can now catch a glimpse of how the crisis is assuming—on a symbolic level and as a collective narrative—a positive sense, since many people perceive it as an opportunity for change. The protests and opposition movements born in the wake of the 2008 crisis have sparked a paradigm shift, both in their conceived strategies of “struggle” and their goals. Indeed, it seems hat change isn’t thought of and enacted on a global level, but is instead put in motion on a more local level. This much is clear from the “Movimiento 15-M” of the Spanish Indignados and Occupy Wall Street: their strategy isn’t based on a symbolic (and physical) attack on the bastions of power embodied by worldwide summits (as was the case during the transition between the twentieth and twenty-first centuries, and above all at the G8 in Genoa); rather, it’s based on the occupation of urban public spaces (Spain’s main city plazas and New York’s Zuccotti Park) and the reappropriation and reconversion of said spaces into shared spaces for collective participation. Although the occupy movement has spread to a national and continental level, each movement remains specific and refers to its own urban territory.

These movements and practices can be viewed alongside the reflections of a few key intellectuals (Jacques Rancière, Slavoj Žižek, Noam Chomsky, Giorgio Agamben) who, albeit with their real differences, all find common ground in their critique of (neo-)liberal thought and Western democracies. What most proclaim is a postideological age turns out to be a postpolitical era, in which any assumption of democratic dialectics is suspended. In Western democracies, on both the local and national level, there’s an increasingly strong tendency to exclude, or at least reduce, moments of social conflict (which mask truly critical points regarding the tensions and contradictions of the capitalist model) from all representation or coverage. Consequently such moments of conflict—or even mere confrontation and dialog—find no appropriate forms through which they might further develop or play out, and thereby find resolution. This determines their deeply postpolitical or postdemocratic character, which is primarily due to the elimination of all internal contradiction within public discourse and the parallel representation of the neoliberal model as the natural state of things—to which no alternative can be offered.

On the local level, within the metropolitan or urban territory, this postpolitical condition plays out on two levels. First, the removal of conflict (or, better yet, any possibility of conflict) takes place on the physical level, that of architecture and urban planning: indeed, it isn’t hard to notice how in recent territorial-management politics the transformation of vast urban areas into commercial zones leads to the disappearance of public spaces; in general, any place where meetings and convergences can happen (of people but also of ideas, thoughts, and approaches to urban living) constitute the ultimate and gratuitous end of said spaces.

The second level is the entirety of processes that regulate the creation of information, its design into sensible forms, and its transmission within the metropolis and throughout the urban context. The importance of these communicative processes for the life of the city is now more crucial and strategic than ever before. We can actually imagine the metropolis as immense machine that produces and conveys forms, meanings, symbologies, narratives, images, and concepts, beginning with the complex network of relationships that animate it.

Hence the use of the term apparatus to describe the entirety of parts that make up the communicative machine at work in the urban context, and above all in reference to its method of action as understood in a biopolitical sense; in keeping with Agamben’s definition of the dispositivo (derived in turn from Foucault’s dispositif), the apparatus has the ability to create subjects, orient them, and determine their conduct and behavior as well as their opinions and chosen discourses.

A concrete example of how metropolitan communicative apparatuses are determinant forces for forms of urban life is the concept of citizenship. The idea of a citizen begins with the ways in which a person (who is either born in or lives in a given city) relates to and participates in the city’s dynamics, as well as his or her degree of involvement in the mechanisms that define certain aspects of that city. Over the course of history urban communicative apparatuses have played an essential role in weaving relationship networks between individuals (thereby developing the public sphere) and in elevating them to become interlocutors of the exclusive (and elusive) powers that traditionally govern the city. The apparatuses that inform, communicate, and mediate experiences within the urban context therefore shape a given image and idea of the citizen, defining the types of relationships and degrees of participation that tie such citizens to the city at large.

The scenario described above also has a ripple effect that impacts design practices. Because urban ways of life are shaped by apparatuses that mediate experiences and relationships, rather than by unmediated first-hand experience, those who contrive these mediations find themselves—whether they like it or not—in a strategic position. Writers, journalists, photographers, painters, artists, film directors, product and communication designers, fashion designers, art directors, advertisers: these are the main people shaping such mediation in the modern metropolis. More than a few have spotted within these design practices a trend that, as has already been said, transforms urban public space into a postpolitical place; it happens the moment that any process or design for urban management and organization is separated from the people who inhabit that space each day. Today, it seems that the entirety of urban communicative apparatuses tends to create forms (be they visual representations or narratives) in which the citizen plays the role of the consumer. It isn’t hard to see how the vast majority of visual representations and narratives currently in circulation and occupying cities’ public spaces (both physically and virtually) are aimed at what Baudrillard, in an Italian anthology of his work, called the sogno della merce or “dream of consumer goods” (addressed in the English-language anthologies The System of Objects and Consumer Society—trans.). Citizenship therefore isn’t determined by one’s participation in public/civic life, and individuals aren’t citizens because they participate in the dynamics that define urban forms and ways of life. Instead, citizenship is now defined by one’s ability (or inability) to access the symbolic universe made up of the brands, logos, and icons that occupy and obfuscate public discourse. The citizen is someone capable of entering that universe through the purchase and possession of consumer goods.

Our idea of urban life—that is, the urban collective’s ability to understand the life in a metropolis, and then interpret and represent it in symbolic and allegorical forms through which it can not only be better understood and explained but also reinvented (in other words, the possibility of imagining a future within urban space, and striving toward it): all that is now paralyzed, immobilized by the symbolic idea of consumer goods. Faced by such an analysis, the first question that naturally springs to mind is: in what ways can graphic design and other visual practices applied to urban life open up new spaces that are truly public, truly shared, and thereby create new forms and relationships upon which to base an active, participatory idea of citizenship?

One answer to this question could lie in a redefinition of communication design’s tasks: today, the goal of such design should be to represent and convey a sense of the conflicts found throughout urban space. In other words, the representative, communicative, and narrative practices at work in the output of designers in urban areas must now be able to open up not only the city’s spaces, but also its tempos and rhythms, to conflicting forms of communication. That means imagining urban space as a moment of encounter between differences and contrasts, a space capable of articulating opposing viewpoints (rather than trying to reconcile them or make them more uniform), of representing social and political contradictions. In this sense design practices, especially in communication design, assume real political value. On the one hand, the city’s physical territory takes on political significance—as a space of confrontation and conflict—which is a prerequisite of any democratic dialectic. On the other hand, individuals—or, better yet, the collectives that inhabit and animate urban life—are the ones who feel the effects of the design apparatus’s new direction, as soon as it creates a new concept of citizenship and of a citizen guided by an idea of a right to the city. 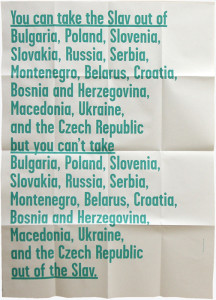