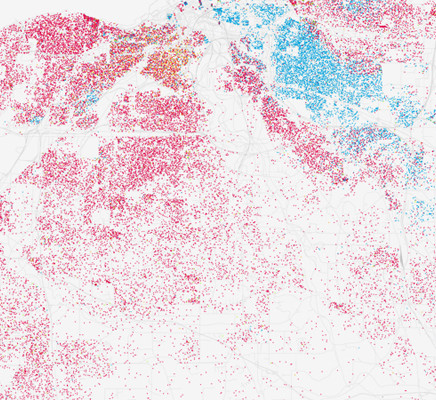 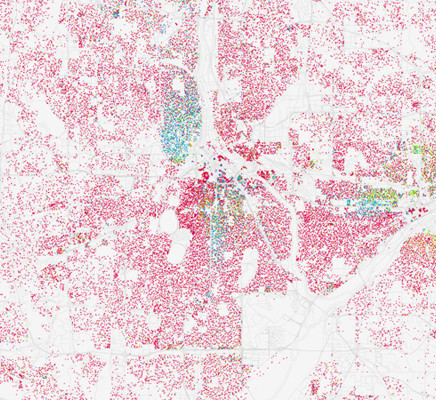 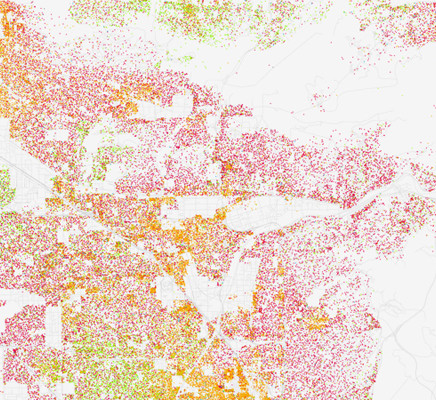 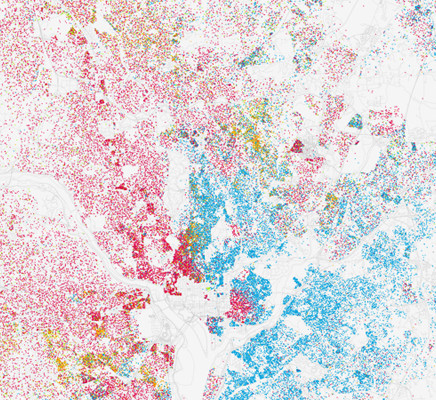 One of the problems at the core of representations—geographical, social, political—is certainly constituted by the necessity to find a right compromise between a fixed and motionless image of a state of being, and the dynamics that constantly alter its nature and form. The problem presents itself, in all its complexity and drama, mostly in the representation of borders—being them the borders of a political map or of any other thematic map—when the use of the segment marks inescapably the inside and the outside of a territory, thus condemning it to a closed identity. The historian and cartographer Bill Rankin experimented a formal alternative which brings with itself ideological consequences: the dot.

In a 2009 map, he represented with five colours the different ethnic components populating the neighbourhoods of Chicago—Caucasian, Afro-American, Asian, Hispanic and others. Each dot corresponds to 25 people belonging to an ethnic group. In this way Rankin’s map points out three possible patterns of urban transition: in some areas the transition between one ethnic group and the other displays well defined colours—this happens mainly in Chicago, as a consequence of the Chicago School of urban sociology of the 20’s. But in most parts of the territory the map shows a gradual transition or a sudden interstice. As Rankin itself explains, such use of the dot—as a graphic norm—adds a bigger number of information to the representation and requires a more sophisticated conception of urban geography—showing at the same time the ineffectiveness of any simplistic and reductive discourse concerning urban planning and the politics of territory.

In 2010 Eric Fischer used again this method applying it to several American cities.